MEDIEVAL CASTLES OF THE CASENTINO AREA

The Castles of the Casentino area and the family of Conti Guidi
During the Middle Ages the Casentino valley was controlled by the powerful feudal family of the Conti Guidi, already Palatine Counts of Tuscany around the year 1000.

The Guidi Counts controlled the Casentino and Romagna throughout the late Middle Ages, creating a dense network of almost uniformly distributed castles throughout the area and positioned at strategic points of access to the valley and the crossing of the smaller valleys that make up the territory.
Those who stay in Casentino should spend at least two days visiting the medieval castles.

Castle of Chiusi della Verna
The history of Chiusi is linked to the name of the noble Catani family.
The fiefdom of Chiusi was donated in 967 by Emperor Ottone I to Goffredo di Ildebrando Catani and included the communities of Badia Tedalda, Pieve Santo Stefano and Verghereto in Val Tiberina and the Casentino courts of Chitignano, Compito, Sarna and Vezzano.
To the ruins of the castle, located at the center of the feud, it is easy to reach by turning right from the road that leads from the village of Chiusi della Verna to the Franciscan Sanctuary.

The castle of Poppi
Belonged to the Conti Guidi family and preserved better than other castles, it is in a very suggestive position, on top of the town of Poppi, one of the most beautiful villages in Italy.
There is to see the inner courtyard, the large frescoed halls, the staircase system, the eccentric column and the family chapel with frescoes by Taddeo Gaddi, a pupil of Giotto.
Often host to exhibitions and cultural events during the summer, we recommend attending the fireworks show, which is usually held on the third Saturday of July, during the twinning celebrations.

The castle of Romena
They had to have three circles of perimeter walls, interrupted by square towers, walkways for parking, control and patrol. The highest part of the hill was not used as a traditional parade ground but to shelter animals, men and provisions in case of need.
It was the feudal seat of one of the most powerful branches of the Guidi counts and was taken by the Milanese in the wake of Niccolò Piccinino, then donated to Neri Capponi at the time of Grand Duke Cosimo.
It lost importance progressively and in the eighteenth century it was sold almost as a ruin by the Goretti Flamini, current owners.

The Florentine Palagio in Stia
Destroyed in 1440, it was purchased at the end of the 1800s by Carlo Beni who, following the models of the buildings of the collectors of the time such as Palazzo Stibbert and Palazzo Davanzati in Florence, had it reconstructed according to the eclectic romantic taste with neo-Gothic episodes.
Inside, the Ornithological Museum and the Museum of Contemporary Art are housed. The halls are often home to cultural events.
always around Stia there are the castles of Porciano and Papiano.

Castle San Niccolò
Castle of San Niccolò is located above Strada in Casentino, on the right bank of the Solano valley, and is only a few kilometers from Poppi.
The name, according to a legend, derives from the fact that Poggio di Ghiazzuolo was infested with demons and that they were driven out by a pilgrim who had with him a relic of San Niccolò, bishop of Mira.
Already a property of the Guidi counts in 1253, it remained so until 1348, the year of the people's revolt against Count Galeotto.
Passed to the Florentines, the castle was transformed internally and maintained its architectural organization until the 18th century when it became a farmhouse. At the end of the 1960s, it was bought by Giovanni Biondi who restored it.

The castle of Montemignaio
From Strada in Casentino you can get to Florence via Borgo alla Collina following the State Road or taking the road to Montemignaio.
The castle of Montemignaio was the ancient manor of the Conti Guidi.
From the remaining masonry foundations it can be noted that the castle walls had a rectangular shape and that the fortress was accessed by 4 doors. The door that now leads into the castle is recent; it was opened for the convenience of the inhabitants who lived inside the walls.

Also here as in Romena, not far from the castle, is the Romanesque church of Santa Maria Assunta.

THE MEDIEVAL CASTLES OF CASENTINO 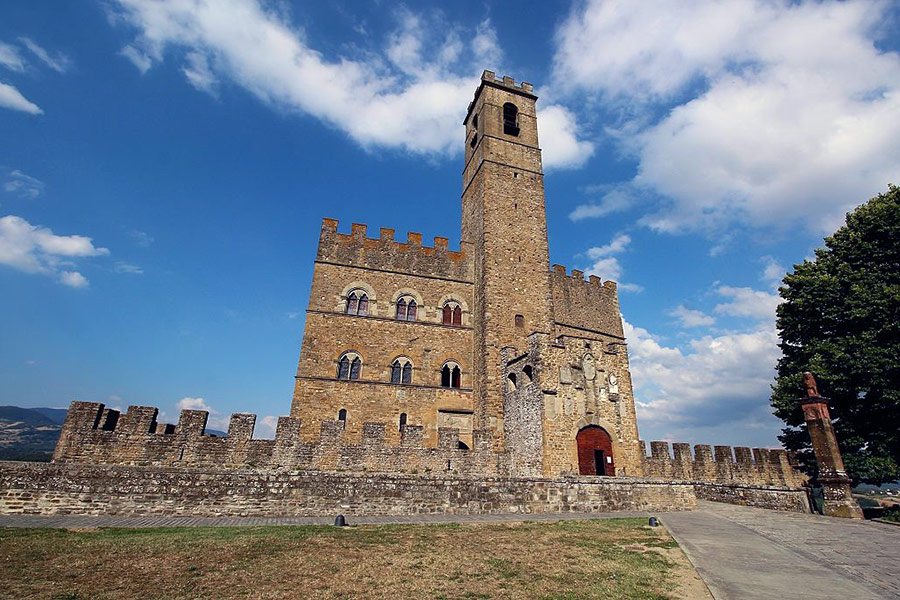 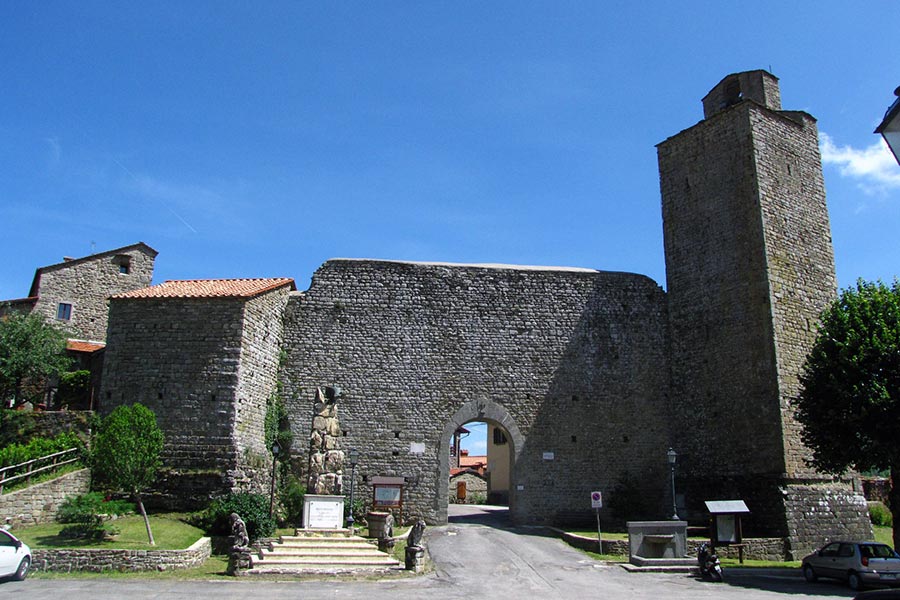 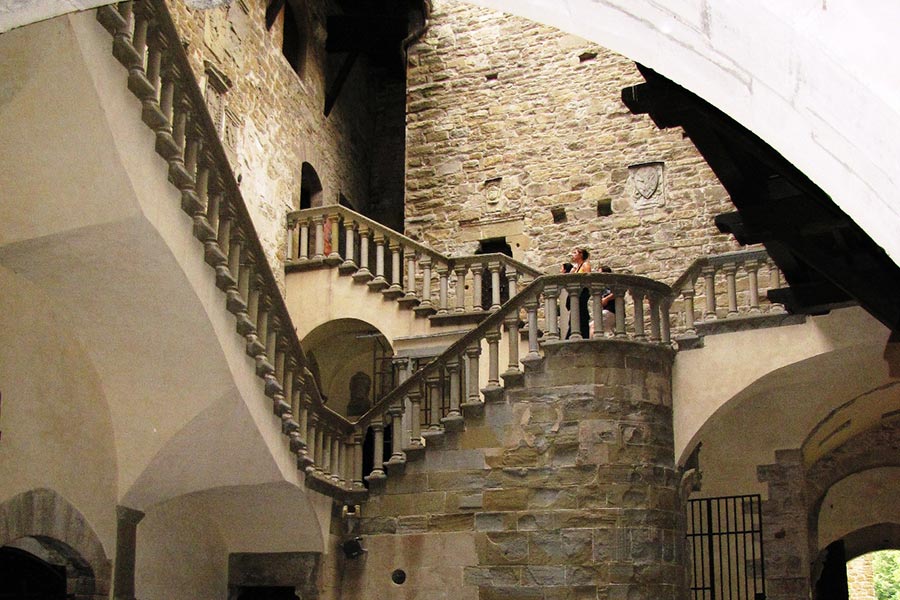 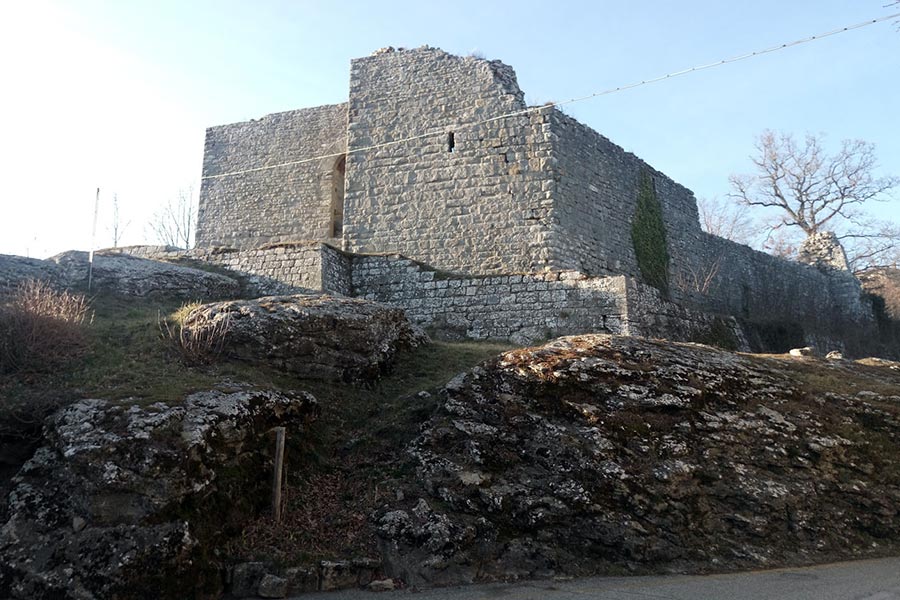